January 2015- Two crews taking part in the MDRS project were sociomapped in order to improve their cooperation while staying in isolation for two weeks.

The Mars Desert Research Station (MDRS) is a facility in Utah that supports Earth-based research in pursuit of the technology, operations, and science required for human space exploration. Since it began its operations in 2001, the facility has been occupied by over 1000 professional scientists, engineers, and college students who have participated in the project as members of over 150 crews who have conducted numerous trainings and research focusing on especially on the exploration of the planet Mars.

At the beginning of 2015, two crews consisting of professional engineers and scientists were sociomapped during their two-week stay at the MDRS. Both crews were given feedback with specific recommendations on how to improve their cooperation with other team members which was based on the sociomapping analysis of the team-members frequency of communication, importance and effectiveness of cooperation, their mutual trust in professional skills, and team performance and atmosphere. Both crews successfully completed their “missions” and the crew members altered their interaction with others based on the feedback provided to them. 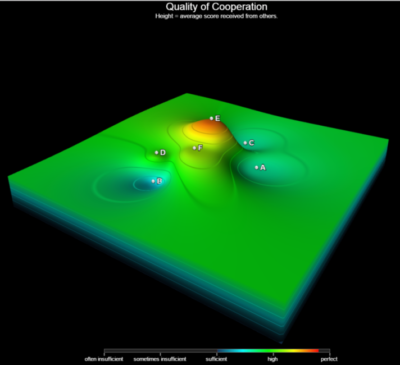