We have been mapping a top 5 basketball team. Interested in how a professional sports team sees itself?

We can see that the entire map is either yellow or green, which means that everyone in the team is rating everyone else very similarly – slightly above average. Everyone feels that there is some room to improve their team cooperation and coordination. Since everyone is on a similar level, our main tells in this map are the players’ proximities.

In the facebook post, we already mentioned the main playmakers – Sam, Pete and Wayne and a group of secondary and tertiary wings and shot guards – Nigel, Karl and John, Mike.

T and X (we’ll call them Tom and Xander) are both centers, they are not, however, a part of the central group with Sam and Pete but their proximity to them is much closer than Mike or John It’s possible they are substitutes for the main center player, Wayne. They get called in to play in less crucial matches or when Wayne needs to get some rest after a longer string of matches.

The same could be said about Q (Quentin) and V (Vance), who are a duo of shot guards, who play exactly the same spots as Sam and Pete. 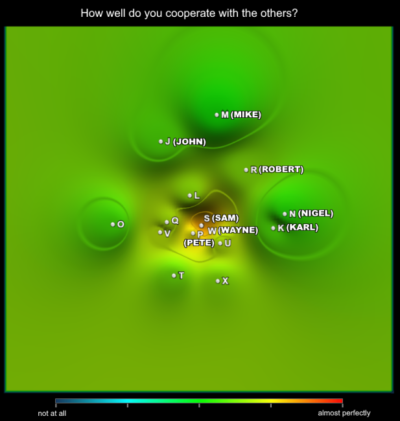